Tsukkun is one of the birds that Nageki and Hitori grew up with at Heartful House orphanage.

As he is living at Heartful House, it can be assumed that his parents were killed by humans, leaving him an orphan.

In a final section titled “Let’s Go to Parrot-Yu!”, Tsukkun visits a bathhouse with the other Heartful House birds when Hitori wins a book of tickets. 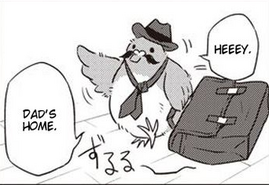 Tsukkun playing "house"
Add a photo to this gallery

Retrieved from "https://hatoful.fandom.com/wiki/Tsukkun?oldid=9602"
Community content is available under CC-BY-SA unless otherwise noted.