Pyonpyon is one of the birds that Nageki and Hitori grew up with at Heartful House orphanage.

Hoppe appears in chapter 12, “Family Memories”. When Hitori calls for all the birds at the orphanage to gather, Pyonpyon asks what was going on. He, along with the others, rushes to greet the newly introduced Nageki. Pyonpyon is later shown playing outside and “dying” from Kanta’s Hatowave Pulsar.

When Nageki is reading, Pyonpyon uses his whiskers to sense that Nageki is not a bad person and reports this back to Kanta.

Pyonpyon also appears in a one-page section titled “Family Memories” at the end of chapter 16. He appears carrying ferns in both hands. Kanta tells him to leave and calls him a “suspicious grass bird”.

In a final section titled “Let’s Go to Parrot-Yu!”, Pyonpyon visits a bathhouse with the other Heartful House birds when Hitori wins a book of tickets.

In cartoon bird form, Pyonpyon is a kiwi bird.

In gijinka (human) form, Pyonpyon is small with large, hazel eyes and light brown hair sticking out in all directions from under his hat. His hat is a brown newsboy hat with a white dashed line. He wears a cutoff jacket the same color of brown as his hat with a dashed line around the bottom hem. One of the pant legs of his brown jeans is rolled up, revealing a white cuff. His yellow shirt has a design with a white egg surrounded by brown dots, and there is a brown dashed line around the bottom hem. He is barefoot.

Pyonpyon seems to have the ability to tell whether someone is good or bad using his whiskers as a sensor.

The name 'Pyonpyon' （ピョピョ、Piyopiyo) is a Japanese onomatopoeia for a jumping noise - which is reflected in the little kiwi's playful personality and behavior. 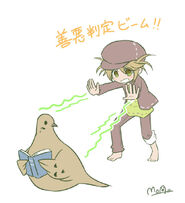 Retrieved from "https://hatoful.fandom.com/wiki/Pyonpyon?oldid=9411"
Community content is available under CC-BY-SA unless otherwise noted.