Kenzaburou Urushihara (漆原 健三郎 Urushihara Kenzaburō) is a gentlemanly barred parakeet who owns Torimi Cafe. He has a calm and humble personality and is quite a neat bird. Hiyoko worked for Kenzaburou during the summer unless you gave the job to Ryouta.

He appears in the summer side story which is only in the full version of Hatoful, as well as in the first story of Hatoful Boyfriend: Holiday Star. He's not dateable.

Hatoful Boyfriend: A School of Hope and White Wings

Role in Holiday Star: Kenzaburou appears only in the first episode of Holiday Star. His role isn't extremely significant, but he shows off some of his personality. He seems perfectly willing to give Ryouta fatherly advice. He also shows Ryouta and Hiyoko the picture that Rabu took before Miru and Kaku stole the Christmas tree. Beyond that, he does not do very much. 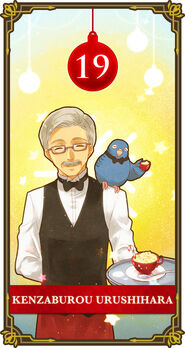 Add a photo to this gallery

Retrieved from "https://hatoful.fandom.com/wiki/Kenzaburou_Urushihara?oldid=11683"
Community content is available under CC-BY-SA unless otherwise noted.